I’ve been using a mid 2013 MacBookPro for the last 3 years now and it was time to do a personal tech refresh sort of thing.

After latest macbooks being kind of a disappointment and also the dongle life being a factor (at least for now, in 2017), I decided to do something kind of radical and buy a windows laptop.

I have owned couple of non-Apple laptops in the past and they were awful. But nowadays the situation seems to be changing rapidly and there are quite a few reasonable choices on the market.

For me, the main contestants were:

After some research and watching review videos I decided to go with HP Spectre x360. 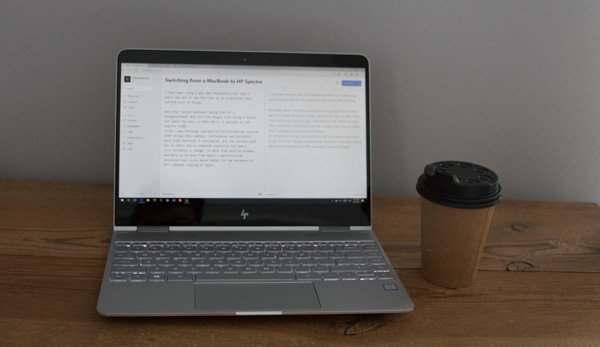 Surface book, is expensive and lacks USB-C ports, which is a non-issue today but might become important a year or two from now.

So anyways, HP it was.

It’s certainly a change. To move from unix to windows OS is one thing.

But to move from Apple’s perfectionist obsession over every minor detail in the hardware to HP’s wannabe copying of Apple is something you just have to live with I guess.

After using this machine for half a month or so I must say that the hardware and the “feel” is what I dislike the most. Windows itself nowadays is quite usable and has all the tools I need.

More on the topic in the future.